By Heather Vihstadt, Director of Development

For nearly thirty years Ann and Phil Aines generously supported the High Desert Museum. According to their daughter, the importance of charitable giving was instilled by their parents. In fact, Ann’s father was also an early supporter of our work. Beyond sharing their treasure, Ann also gave of her time and talent as a loyal volunteer who contributed more than 4,000 hours. In 1997, she was named Volunteer of the Year and in 2010 she was inducted into the Volunteer Hall of Fame. She served in the wildlife department, working with raptors, and became affectionately known as the, “Bird Woman of Bend.”

Ann died in January of 2016 and Phil passed away approximately six months thereafter. Years prior, Ann and Phil had established a unitrust and named the High Desert Museum as a beneficiary, sharing a percentage of their estate. The Museum received approximately $150,000 to support the birds of prey. Little did Ann and Phil know what an incredible gift this would be to our institution and the lasting impact it would have.

The Museum cares for an array of birds, many of which partake in the wildly popular Sky Hunters and Raptors of the Desert Sky flight programs. Through these shows, wildlife experts educate thousands of people annually about various species’—their respective habitats, diets, unique physical traits and adaptions. The flight programs provide meaningful enrichment for our birds while simultaneously raising public awareness about critical conservation issues. Many visitors experience awe and wonder through these up-close interactions, inspiring them to help protect these magnificent creatures. One visitor commented: “The animal presentations are the best we’ve ever seen in any zoo or other museum!” 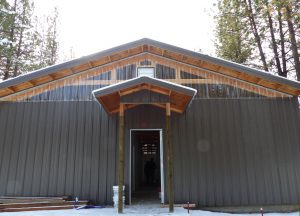 Some of the raptors are housed in a building called a mews. The current mews is the oldest structure on Museum property. It was originally designed to be a game bird pen that was later retrofitted. Thanks to legacy of Ann and Phil, we have the necessary funds to construct a new, state-of-the-art mews, that will greatly enhance the living quarters of our birds while providing much needed workspace for Museum staff. And the building is nearing completion! A contractor was hired to frame the building, but our Facilities and Exhibits staff have been working diligently on the interior finishing.

The new structure is much larger (the current mews houses six birds and the new one will house ten) with more spacious enclosures permitting the raptors both indoor and outdoor access with doorways large enough to accommodate various species’ wing spans. The interior includes fans to circulate air, radiant heat, clear plastic panels to provide natural light and ultraviolet lights set to timers (which impact molting and hormone production). There are smooth plastic interior walls, which are not only sanitary, but help to protect the feather condition of the birds. The exterior bars for outdoor living spaces have been constructed from six miles of steel conduit, which are also designed for bird safety. The larger building not only enables the Museum to provide the highest standard of care, but it may enable us to grow our collection of raptors. This long-held dream has now become reality thanks to the immense kindness of Ann and Phil Aines and for that we are forever grateful.