Looking back on a life of risk-taking and death-defying stunts, land speed record holder Kitty O’Neil declared, “I’m not afraid of anything. Just do it. It feels good when you finish. You made it.” Her words speak not only to her own love of speed but also offer encouragement to anyone contemplating a new challenge.

Our newest exhibition, Daredevils, looks at those who have attempted death-defying feats such as jumping a canyon or going faster than anyone thought imaginable. For daredevils and risk-takers, the High Desert’s playas and canyons have long provided a setting to test the limits of what’s possible. This original exhibition considers the cultural significance of daredevils against the backdrop of the challenges of the 1970s, including the Vietnam War, an economic recession and an unfinished civil rights movement. It was a time with some similarities to our own, as we navigate the uncertainty of a global pandemic and confront the nation’s racist past and present.

The exhibition highlights some of the best-known daredevils, such as Evel Knievel and Kitty O’Neil, considering how they became larger-than-life symbols of hope, freedom and independence.

It includes objects from High Desert stunts, such as the 1966 Triumph motorcycle that Denny Edwards, known as “The Flying Irishman,” jumped when he came out of retirement for a final jump just a few years ago. It showcases a helmet and jumpsuit worn by Kitty O’Neil, who set a land speed record in Oregon’s Alvord Desert in 1976.

Through a playful and engaging exhibition for all ages, Daredevils explores the meaning risk-taking plays in our lives and why these individuals capture our imaginations.

During World War II, the U.S. federal government incarcerated 120,000 people of Japanese ancestry, about two-thirds of whom were United States citizens. The government used racist propaganda and fear-based arguments to justify their actions. For those who were incarcerated—imprisoned without charge—the experience was life-changing.

Witness to Wartime: The Painted Diary of Takuichi Fujii examines this painful chapter of American history. Artist Takuichi Fujii was among those imprisoned, first at the Puyallup temporary detention camp on the Washington State Fairgrounds and then at Minidoka Relocation Center, where he lived with his family for over three years. During this time, he painted with oil and watercolors and sculpted. He also kept an illustrated diary. Nearly 400 pages in length, it chronicled his family’s forced removal from Seattle and concluded with the closing of Minidoka. Fujii’s illustrated diary as well as the other works he created illuminate the bleakness of everyday life in confinement as well as moments of beauty and hope. For some of those incarcerated, art served as a means of expression and survival. Fujii’s work makes apparent the resilience of those imprisoned.

After the war, Fujii and his family moved to Utah and then to Chicago as a part of the government’s resettlement program. He continued to paint, experimenting with abstraction. After his death in 1964, Fujii’s artwork from 1942 onward was kept in storage by his family until his grandson recognized its significance and began translating the diary.

This exhibition offers a rare opportunity to see the breadth of Fujii’s work, including his American realist paintings of the 1930s, his wartime paintings and drawings and his postwar abstract expressionist paintings. One historian has called Fujii’s illustrated diary “the most remarkable document created by a Japanese-American prisoner during the wartime incarceration.” It not only sheds light on the past but continues to resonate today.

At the start of the 20th century, amid changes brought about by industrialization and the forced removal of American Indians to reservations, Edward S. Curtis undertook the enormous project of photographing Native people and recording ethnographic information from over 80 tribes across North America. The project took him over 30 years. It also came at significant personal cost, but it resulted in 20 bound volumes, over 2,000 photogravures and numerous recordings of Native languages, music and ceremonies. A small portion of that body of work is exhibited now at the High Desert Museum through January 20 in By Her Hand: Native American Women, Their Art, and the Photographs of Edward S. Curtis. 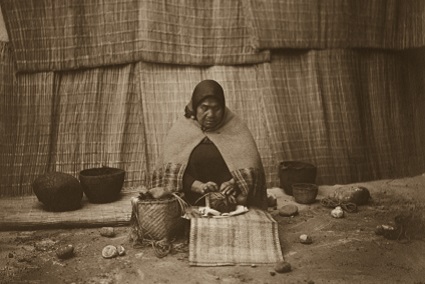 Over the decades, Curtis’s sepia-toned prints of Native people have shaped the ways that many non-Native people think about American Indians and the American West. Curtis’s legacy is a complicated one. He left us with thousands of photographs and recordings of Native people that otherwise would not exist. But he also brought the biases of his era to the project, photographing American Indians as a “vanishing race”—a stereotype that continues to negatively affect Native people’s lives. Countering this perspective, the exhibition features historical and contemporary works of art from the High Desert Museum’s permanent collection, highlighting the deep history and continued vibrancy of Indigenous people’s artist practices.

To broaden the story further and connect Curtis’s work to Native people’s lived experiences today, we asked three Native artists to comment on their art, its significance and the legacy of Edward Curtis. Pat Courtney Gold, a Wasq’u (Wasco) basket maker whose work is featured in the exhibition, commented that, “Art is part of my heritage. It is important for me and for Plateau people in general to see what we’re capable of reviving and the beauty of our heritage. Our heritage existed for thousands of years and speaks to us still.” Gold’s comments remind us of the importance of art as an expression of one’s identity and community and the significant role it can play in our lives.

By highlighting works of art created by Native women alongside Curtis’s prints, the exhibition celebrates Indigenous artistic traditions that have existed for centuries. They continue to thrive within Native communities today. It also reminds us not to look simply to Curtis but instead to look to the ways that Native people have and continue to express and portray themselves through their art. 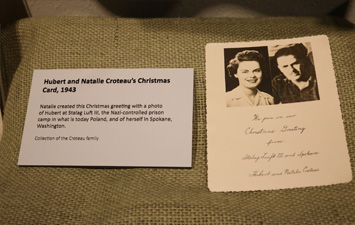 One of the most meaningful parts of working on World War II: The High Desert Home Front has been the opportunity to get to know veterans and their families. Our exhibit includes the stories, uniforms and personal belongings of four people who served during the war.

One of these soldiers is Hubert Croteau, a B-25 pilot. During his second mission, his plane was shot down over North Africa. Three of the men in his crew died in the crash. Croteau survived and was captured by German soldiers. They sent him to Stalag Luft III, a Nazi controlled camp for air force servicemen. Soon after, Hubert’s wife, Natalie, received a telegraph that he was missing in action. It would be another six weeks before she received news that Hubert was alive and had been taken prisoner.

Throughout Hubert’s imprisonment, he and Natalie exchanged letters, and Natalie sentpackages, including warm clothing. Despite the fact that conditions at Stalag Luft III were harsh—Hubert was often cold and hungry—the Nazi guards took pictures of the imprisoned Allied soldiers to prove that they were alive and in good health. Hubert sent one of these photos to Natalie. With it, she created a Christmas greeting that included a picture of herself inSpokane and Hubert in Stalag Luft III. This Christmas card is incredibly moving. Itis a testament to the strength of spirit of those on the front lines and those at home. After being imprisoned for 33 months, Hubert returned home and shared the next 64 years of his life with Natalie and their children.

Another favorite object is Harry Morioka’s camera. After spending a year incarcerated at the Tule Lake War Relocation Center, Harry was drafted into the U.S. Army’s unit of Japanese Americans. Because he was fluent in Japanese and English, he was selected for the Military Intelligence Service and stationed in Japan. 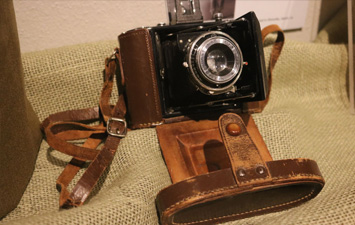 While overseas, Harry traded two packs of cigarettes for a Zeiss Ikon camera. As part of his military duties, he traveled around Japan, taking pictures everywhere he went. He even found his extended family, who he had visited once as a young boy. One day Harry and a friend packed a Jeep full of food, water and treats. They traveled several hours to deliver the supplies to Harry’s family. Conditions in Japan at the end of the war were dire, and his family credited Harry with saving their lives.

In 1946, Harry returned home. Harry and his wife, Kazuko, began the work of rebuilding their lives in The Dalles—before being imprisoned at Tule Lake, they had sold their home at a fraction of its value. They repurchased the house, paying well above marketvalue. Harry opened a business and became an active part of the community.

The Christmas card and camera are so special because of the stories they tell—stories of love and connection in the midst of hardship and war. Today, Hubert Croteau’s and Harry Morioka’s families are keeping these stories alive. Through them, these objects have much to say about American’s experiences during the war.