Since its inception, a cornerstone of the High Desert Museum has been maintaining the Donald M. Kerr Birds of Prey Center and its collection of rehabilitated birds. It is a critical part of educating people about the support necessary for several species’ survival. 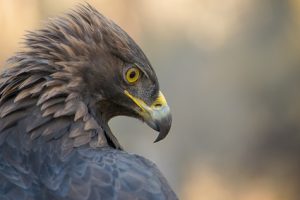 This is the story of the golden eagle on exhibit. His name is Phillip.

The High Desert regions of Wyoming, Utah, Nevada, Idaho, Oregon and Washington have become an important refuge for the golden eagle, a species whose breeding range once encompassed large tracts of the northern hemisphere. The vast high desert in the West still offer isolated nesting sites and the surrounding sagebrush seas offer abundant food in the form of jackrabbits, ground squirrels rodents and other birds.

However, raptor biologists began realizing that populations in the High Desert were declining, threatened by a number of human-based causes including electrocutions; car strikes; habitat degradation and loss, including higher exposure to people, exposure of isolated nesting sites, and threats to food resources; exposure to lead; and persecution in the form of shooting, trapping, and deliberate poisoning. In addition, people often ask about wind turbines affect the golden eagle population. While it is an active area of study, power lines and cars kill far more raptors than wind turbines.

Biologists believed these issues presented an alarming future for this apex predator. Based on these concerns, in 2013 the U.S. Fish & Wildlife Service established the Western Golden Eagle Conservation Team. Its mission is to evaluate the various threats to golden eagles and recommend conservation strategies to curb mortality rates.

This is where the Donald M. Kerr Birds of Prey Center comes in. It has in residence many birds of prey that were injured in the wild. Those injuries were so severe they resulted in permanent disability, at which a point a wildlife veterinarian deemed them non-releasable. In these cases, the birds were evaluated and based on the findings, euthanized or transferred to an education facility such as the High Desert Museum.

At the High Desert Museum, birds of prey, including its three golden eagles, are wildlife ambassadors, working with Museum staff to educate the public. Staff talk with visitors about raptor conservation and demonstrate the power and magnificence of these birds through free-flight programs and interpretive talks. Nothing is more impressive than a golden eagle standing on a perch 10 feet away. Visitors experience first hand the keen gaze of the eagle that can spot prey far away and the enormous spread of its wings that, when healthy, would have carried them miles, soaring above the High Desert.

Visitors also learn about their habitats and habits, and how we can all participate in minimizing human-cased threats to ensure their survival. For example, lead poisoning in birds of prey.

In addition to live rodents, rabbits, ground squirrels and other birds, golden eagles feed on carrion in the wild. And this carrion, often remains left by hunters, carries lead from bullets that gets ingested by golden eagles. Once lead is incorporated into the bloodstream at a large enough concentration, a bird can become very sick, exhibiting a range of neurological symptoms, such as tremors, convulsions, lack of coordination, and paralysis of the digestive system.

If the bird gets a large dose it can deteriorate and die directly from the lead poisoning. However, even at lower concentrations, lead in a raptor’s system impacts motor control and reaction times, likely contributing to other kinds of injury or mortality. This would account for why so many birds taken to rehabilitation centers for various mechanical injuries also turn out to have been exposed to lead.

According to the American Bird Conservancy, millions of birds are poisoned by lead every year.  Unfortunately, only a portion of these find poisoned birds find help at raptor rehabilitation centers like Blue Mountain Wildlife in Pendleton, Oregon, and eventual homes at facilities like the High Desert Museum in Bend, Oregon. Switching to alternative source of ammunition, such as copper, would prevent many majestic birds of prey from being poisoned.

Part 2: Searching for the Perfect Golden Eagles
A Christmas card and a Camera: Objects with Stories to Tell