What will be your legacy?

You can play an important role in shaping the High Desert Museum’s future through a legacy or “planned” gift. Large or small, a gift from your estate can have a long-term impact on the Museum. From caring for wildlife, to funding children’s programs or creating an exhibit, your legacy gift will make a difference for generations to come!

Benefits for you and your family

A charitable gift will help you combine your philanthropic passions with your financial needs and tax planning. And it’s easy to do. A simple directive in your will or trust will support the Museum in continuing to offer its unique educational programs and compelling exhibitions. Other types of legacy giving can help create an income stream to you from an appreciated asset, lower your income taxes and save your family money by decreasing estate taxes. Please consult with your legal or financial advisor to explore the best way you can honor your legacy.

One of the most powerful reasons people fund endowments is to create lasting legacies. These funds provide perpetual support for the Museum and also remind family and friends of your values and commitments. Endowment gifts can be made to support Museum operations, or for its programs, exhibits or wildlife.

I give, devise and bequeath the High Desert Museum, a nonprofit 501(c)3 organization as determined by the IRS (Tax ID #51-079336) all (or state the fraction or percentage) of the rest, residue, and remainder of my estate, both real and personal to fulfill its mission.

Donors who commit to a legacy gift are honored with a membership in the Museum’s Robert W. Chandler Society. Keep scrolling to read about Bob Chandler!

Help ensure that the natural and cultural resources of the High Desert endure for generations to come. Your gift, and the lives it touches, can be your legacy.

To take the first step, please call Associate Director of Philanthropy Heather Vihstadt at (541) 382-4754 ext. 329 or email her at heatherv@highdesertmuseum.org. She will be glad to assist you in the process or answer any questions.

The High Desert Museum is a qualified 501(c)3 non-profit.  All donations are tax-deductible as allowed by law.

Learn more about the following: 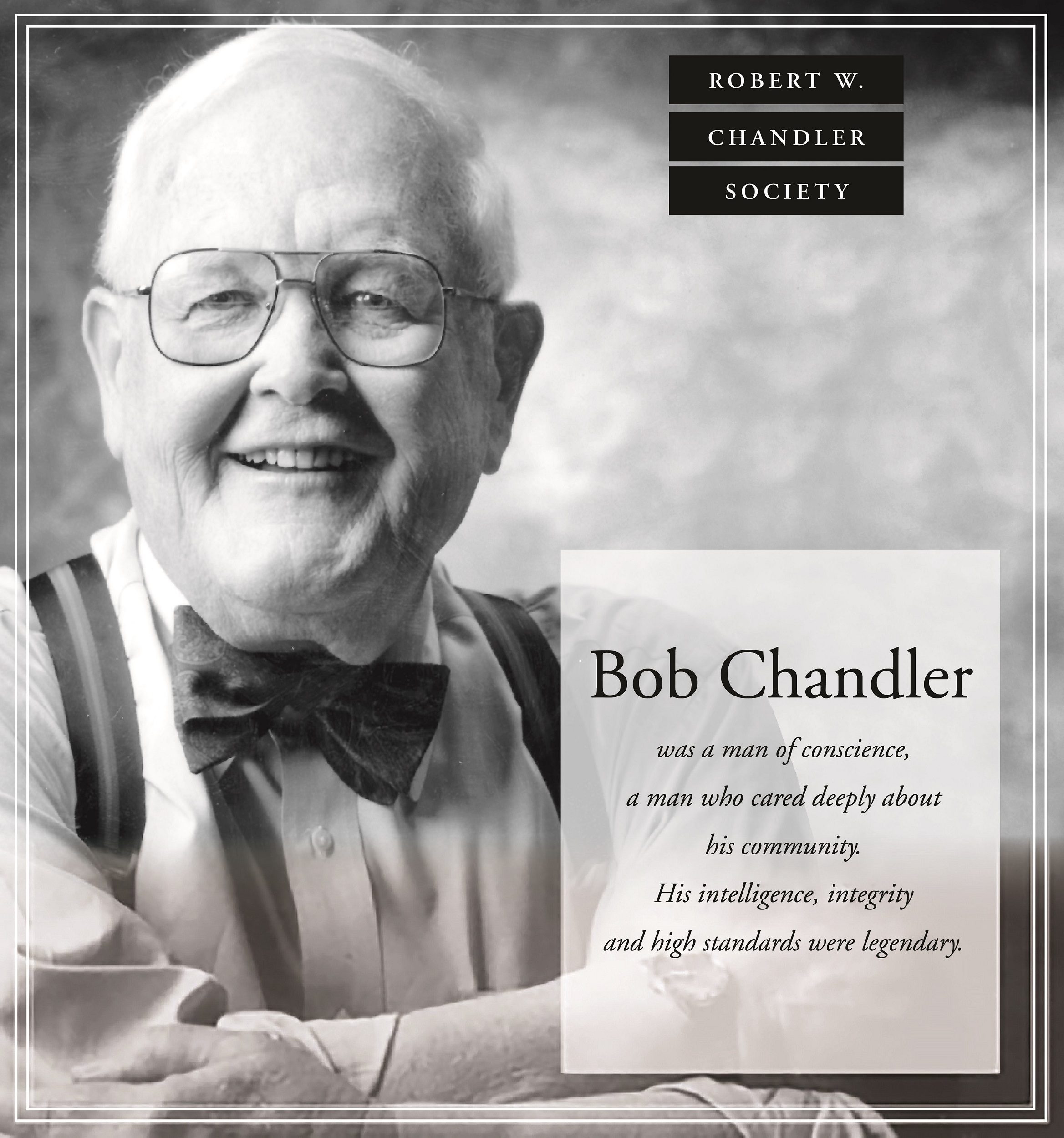 Robert “Bob” Chandler was a man of conscience, a man who cared deeply about his community. His intelligence, integrity and high standards were legendary. As the owner and editor of The Bulletin, the region’s largest and most comprehensive newspaper, Bob dedicated himself for 40 years to bringing excellence to Bend and all of Central Oregon. He also contributed to the area in many other ways through a strong belief in philanthropy and volunteerism.

It was because of Bob’s reputation as a philanthropist and a leading voice in the community that The High Desert Museum’s founder, Donald M. Kerr, approached him to be one of the initial donors to making the Museum a reality. At first Bob dismissed Don’s request, calling Don a dreamer and predicting that he would never succeed with this concept. But soon Bob became enchanted with Don’s vision and he made an initial financial investment in the fledgling institution.

Bob’s early generosity was truly instrumental in the founding of our institution. He went on to lead the Museum in many ways including continued financial support as well as chairing the board of trustees from 1989-1990. At the time of his death on July 12, 1996, Bob made a final and enduring statement about the importance of The High Desert Museum by providing for the Museum in his estate plans. This was the first planned gift ever received by the Museum. The fund that Bob created to benefit the Museum furnishes important perpetual support and, thereby, helps to insure our future.

One of Bob’s driving beliefs was that one owes a debt to the community that should be repaid by giving time or money, or both if possible. Bob always made such giving a priority and set a shining example for others to follow. For many years he was the Museum’s largest individual donor, contributing to exhibits, publications and education programs as well as to capital campaigns. Would you expect anything less from a man who cared so deeply?

It is for these reasons that we have chosen Robert W. Chandler’s name for the society by which we will recognize and honor those who provide for the Museum through planned gifts. The Robert W. Chandler Society will honor those people who make provisions for the Museum through wills, trusts, or a variety of other estate planning techniques. Recognition will include listing Chandler Society members’­ names (with permission) in Museum publications and other appropriate materials. Such meaningful donations not only help insure the Museum’s future, they also allow donors to achieve personal philanthropic and financial goals.

For information about how to become a member of the Robert W. Chandler Society, please contact Director of Philanthropy Kathy Baczko at 541-382-4754 ext. 248 or email her at kathyb@highdesertmuseum.org.