A few years ago, High Desert Museum staff learned from the U.S. Fish and Wildlife Service that the Blue Mountain Wildlife Center in Pendleton, Oregon, had several non-releasable eagles. 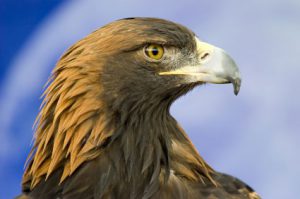 One of the birds was a sub-adult male golden eagle that appeared to have been struck by a car. It also had serious levels of lead poisoning. Lead levels in raptor blood more than 65 micrograms are considered “clinical poisoning”. This eagle had levels more than 100, enough to be lethal.

Lynn Tompkins, the executive director of Blue Mountain Wildlife, successfully chelated the eagle (a process where lead is chemically removed from the bloodstream) and lowered the blood lead levels to under 5 micrograms per deciliter. She then flight conditioned the eagle and, after a few weeks, considered it strong enough to be released.

Unfortunately, six weeks after its release, the eagle was recovered starving, likely the result of a permanent wing injury and possible continuing neurological effects from lead poisoning that made it unable to hunt successfully.

This bird was now considered ”non-releasable,” yet still had some flight capability and looked perfect to the unsuspecting eye. Knowing this opportunity may not come around again for years, Museum staff completed the necessary transfer permits and made arrangements to travel to Pendleton.

Upon arriving at Blue Mountain Wildlife, staff watched the male golden eagle fly swiftly in the large chamber. While he looked strong, they saw a slight hitch in his left shoulder, which is what made him unable to capture prey following his initial release. He would be perfect for the education programs at the High Desert Museum, and (hopefully) be a candidate for the Museum’s Raptors of the Desert Sky and Sky Hunters free-flight programs.

Almost three years later, Phillip is one of the most important birds at the Museum. Phillip ties the research work the Museum has done into lead poisoning directly to the Museum’s education programs. He is a living example of how lead poisoning affects raptors and though he displays ongoing signs of neurological damage, he has a even temperament while being handled.

It took about a year of training before Nelson was comfortable having Phillip participate in the public education and free flight programs. The trainers combined traditional falconry training with positive reinforcement (food) and increasing exposure to people to bring Phillip’s comfort level with the public to the point where he participates in three-to-four programs a week, primarily educating visitors about lead poisoning in the wild.

Growing Up Otter
Part 2: Searching for the Perfect Golden Eagles