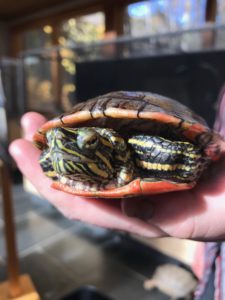 One of the most common questions we get from visitors is about how the creatures, from river otters to desert tortoises, came to be in our care. And every day, I spend time with a small, new resident that came to us last summer, a Western painted turtle with a very interesting story.

A good Samaritan found her in Woodburn with a screw in her shell and fishing line cutting into her neck. She was rightfully turned in to the Oregon Department of Fish & Wildlife (ODFW) for recovery. ODFW speculates that she was being kept as someone’s pet because of the screw. Most likely her owners inserted the screw so they could tether her outside. She escaped anyway and then got caught up in the discarded fishing line.

After the rescue and rehabilitation, ODFW contacted us to see if we could provide her with a home. We had the perfect spot in our Desertarium.

We have four Western painted turtles in the collection. All can be found in the Desertarium’s turtle exhibit. The species is found across North America, with the Western painted turtle being one of four subspecies. They are commonly found in the Willamette Valley in Oregon. However, they are still found throughout the Cascades, even on the east side in our neck of the woods.

Oregon’s native turtle species are protected, and it is illegal to remove one from the wild to keep as a pet. Unaware of this fact, many who stumble on a Western painted turtle in the wild are tempted to take it home. There are a few exotic turtle species in Oregon that are illegal to possess, the most well-known being the red-eared slider. It’s now invasive in Oregon thanks to the exotic pet trade. The message here would be to always do thorough research when deciding whether to acquire an exotic pet because they are not always legal. They often require care that is beyond what the average person can provide. Even if you find yourself out over your skis, so to speak, it is illegal to release pets into the wild.

Now that the turtle has a happier ending at the High Desert Museum, why is she non-releasable? This turtle cannot go back into the wild for a few reasons. First, ODFW biologists do not know where she came from. If she wasn’t originally part of a population of turtles, introducing her could potentially have adverse impacts. Oregon turtle populations are fragmented due to the disappearance of habitat continuity caused by human development and habitat degradation. Because of this, introducing outside DNA can potentially create offspring that are not well-suited for that particular area. 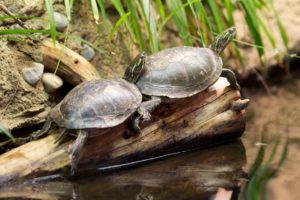 Because of the fragmentation of wild populations, introducing an individual to a new population could also spread disease that is found in one area to another. It is important to note that in the state of Oregon it is illegal to release wildlife that has been under human care for longer than 72 hours.

We’ve been very happy with her progress. She is frequently seen floating at the surface of the exhibit where she can check out the activity in the gallery. She is also spotted basking with the other two females of the same species. Her wound from the fishing line is completely healed, but she will have her screw hole for some time. In the short time she’s been with us, she’s become an amazing ambassador for her species, sharing with visitors the importance of conservation and responsibility.