The slow-flying pigeon didn’t have a prayer. From high above, the peregrine falcon zeroed in on its prey, tucked his wings, and dove. With speed topping 200 miles an hour, it struck, talons first, and dispatched the bird from the air. It was mercifully instantaneous.

The hunting prowess of falcons, eagles, hawks and owls has enthralled people for more than 4,000 years. In parts of Asia and the Mid East falconry has been in continuous practice almost as long. Some cultures, such as the Mongols and the Bedouin, relied on their friendly falcons to put food on the table.

Today, people stop and gawk when they see a hawk perched on a fence. A golden eagle nest in Central Oregon has its own web cam and an owl in the park is front page news.

So it’s no surprise that our free-flying show, Raptors of the Desert Sky, is a big success in the summer.Worthy of three pages in The Bulletin. 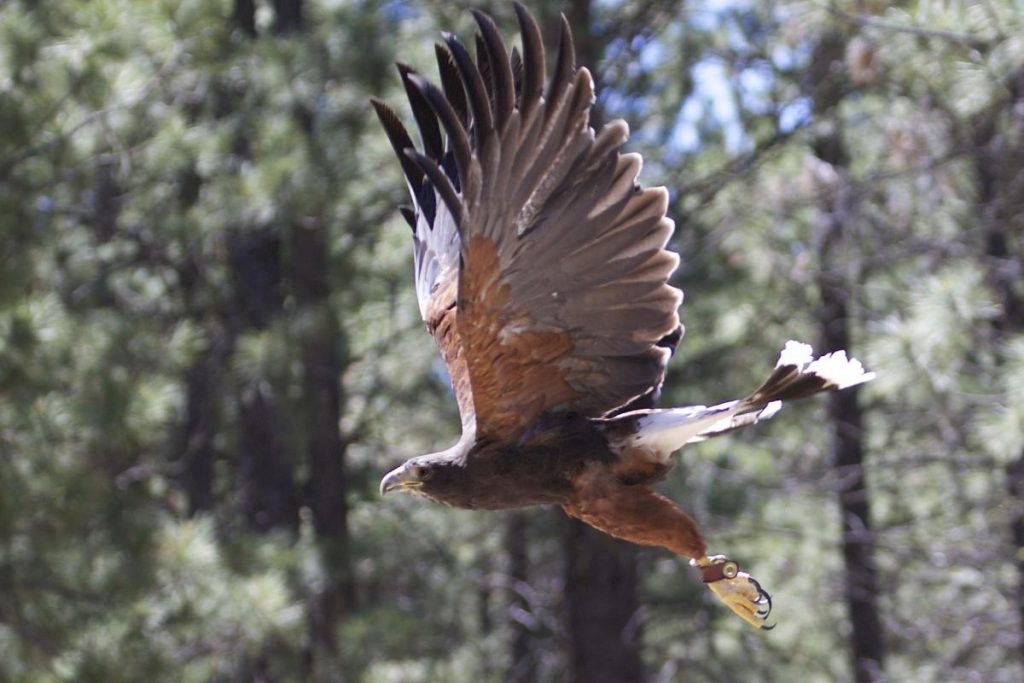 “People are naturally fascinated by these birds,” said John Goodell, Curator of Natural History at the High Desert Museum. “They’re just so majestic and impressive to watch, especially when they fly so close overhead. You’ll never have an experience like this in the wild.”

Goodell has worked with almost every species of raptor in the High Desert. He and staff of bird nerds at the Museum currently care for more than 20 birds of prey, five of which regularly participate in the flight program.

This is just the third summer of the Raptors of the Desert Sky program. Putting on a live show featuring various species of raptors can be a challenge. As Dana Whitelaw, VP of programs put it, “Sometimes things can get a bit interesting.”

Recently, the turkey vulture added suspense to the show when he decided to wander off for a bit of sunshine and free time. The show is outdoors, so the birds are equipped with radio transmitters just in case. But in the end, the vulture returned on his own time.

Our two Harris’ Hawks act like an old married couple… He tries to steal her food. She squawks at him, and bullies him around. Of course, she’s bigger than he is — that’s just the way it is in the natural world of raptors.

One of the most frequently asked questions by spectators is where the birds come from… how they end up at the High Desert Museum.

Every bird has a unique story, but they all have one thing in common: They could not survive in the wild. They’re either injured or “imprinted” by human contact. The turkey vulture, for instance, was raised in captivity after being found out of the nest at a very young age. Once they’re taken in by a human, there’s no going back.

The Peregrine falcon is 17 years old, much older than any in the wild. She’s fed a healthy diet of meat, much like she’d have in her natural habitat. Goodell’s staff monitors her food intake to the gram and works with her daily to keep her in flying shape.

One bird that’s being nursed back to health, and is likely to be released into the wild, is a small Merlin with a broken beak. “We are a licensed rehab facility, although that’s not what we focus on doing. Most of the birds we get have already been through that, and need a permanent home.”

Surprisingly, Goodell said many hawks and owls are injured after having run-ins with cars. For instance, we have a Swainson’s hawk that was hit by a car and is blind in one eye.

Goodell hopes to add three more birds to the show by next summer, the first being a young Prairie Falcon later this fall.

Wildlife was always at the heart of Donald Kerr’s vision for the High Desert Museum. His hope was that witnessing the flight demonstration of an American kestrel, touching the belly of a gopher snake, or seeing a bobcat curled up with his favorite old boot would be enough to inspire others to become stewards of High Desert wildlife.

In his program Goodell makes a point to describe the threats that each bird of prey species face. He also loves to tell the story of the Peregrine falcon because it has such a happy ending. “In the late 60’s DDT and other pesticides had wiped out the Peregrine Falcon completely from the Eastern United States,” he said. “But captive breeding and relocation efforts called hacking successfully reintroduced the birds over a 30 year period. In 1999, the peregrine falcon was removed from the endangered species list and today there are healthy populations throughout the United States.

Owls at Halloween
Animal Enrichment at the High Desert Museum