Around the world, people have associated owls with mystery, witchcraft and even death. After all, they are creatures of the night, and we humans are inherently fearful of the dark: what we cannot see could hurt us.

For example, many African tribal names for owls translate as “witchbird.” And the stark white barn owl is often called “ghost owl.” Many cultures have hunted owls to rid their villages of evil or death, but also to reap medicinal ingredients. Eating owl eyes was believed to offer night vision, raw owl eggs were thought to cure alcoholism, boiled owl fat was said to treat sores and owl soup was a folk remedy for whooping cough. Owl hearts were revered as offering strength for battles, curing epilepsy and as a truth serum.

Speaking of truth, humans benefit greatly from having owls around us alive, especially barn owls, who like to live in, yes, barns. That’s where they help farmers by hunting pests. One barn owl can eat 1,200 mice annually in just one field. What a great pesticide – it’s free and doesn’t put chemicals on the food that we eat! 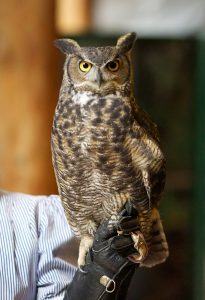