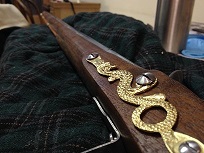 In Living History, we’re always looking for ways to bring our visitors back to the past. This gives them an authentic and memorable experience. One such experience is the sight, sound, and smell of a black powder musket being fired. For the fur trappers camp during Frontier Days (c. 1820) we had one small need: to build a brand new Northwest Trade Gun.

The Northwest Trade Gun itself is not an overly complicated or even hard to manufacture gun. On the contrary, it’s designed to be built quickly so that it can be traded for goods, thus it being named a “trade” gun. Make no mistake; building a gun is called gunsmithing for a reason. Even today when you buy a flintlock musket gun building kit, it isn’t as simple as opening the box, reading the instructions, putting part A into hole B and giving it a finished coat. It’s a gun kit, not a Lego set.

Crafting an older style gun is as much a test of skill as it is a test of patience. A modern day expert gunsmith can make a flintlock rifle from a kit in about 40 hours of labor time. That isn’t including the days, weeks or even months it takes to apply finishing coats and allowing them to dry. If you didn’t care about appearances, but just wanted a functional firearm? You’re still looking at a good 30 hours for your gunsmithing time. For someone who’s never attempted gunsmithing? Maybe 80 hours.

To build a Northwest Trade Gun you must drill and shape the wood and metal to your whim, even with a kit. Of course, a very solid grasp of mathematics is required for precision drilling, but you also must have the hands and fingers of an artist as you shape the stock to its desired form. Even with today’s modern power tools and equipment, this is a tedious process. 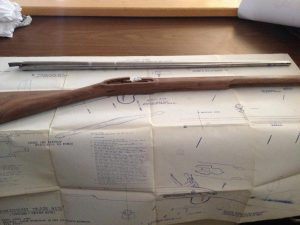 I, of course, had no idea what I was doing, so a good gentleman by the name of Jim Malloy took me under his wing and showed me the basics. Jim Malloy himself is the President of the Beaver State Historical Gunmakers Guild located in Prineville, Oregon. I foolishly assumed that the kit would come to us quite nearly completed and all that we would have to do is make it look pretty. I have never been so wrong in my life.

Regardless, the Trade Gun was finally finished, and I’m rather proud of the end result. Of course, I did make sure I wasn’t the first one to shoot it, though.

A New Delivery for the High Desert Museum!
Treasures of the vault