In the midst of staff preparations for our 2015 summer season, our porcupine Honey had a baby!

A baby porcupine is called a porcupette (believe it or not). After a seven month gestation, they are born with their eyes open and all 30,000 or so quills in place, characteristics that set porcupines apart from many of their rodent relatives. The quills are soft at birth (which I’m sure mama appreciates), but they harden within a couple of hours after birth, providing the porcupette with some protection against predators.

Able to crawl soon after birth, the porcupette spends its first few days nursing, sleeping, moving about and hiding behind mom. Dads provide no care for their offspring. In this case, Thistle, the dad, was moved to another enclosure. For the first two weeks of life the porcupette nurses at night and will continue to nurse until four months old.

As an arboreal or tree dwelling rodent, a baby’s climbing instinct kicks in mere weeks after birth. They forage in trees and transition toward a strictly herbivorous diet that includes leaves, green plants, twigs and the cambium layer of trees. 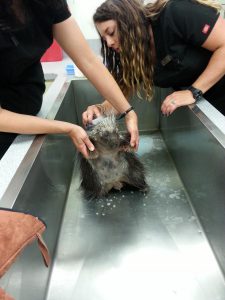 Honey has taken to motherhood and is protective of her baby, often standing in between it and viewers who linger a little too long for her liking. As with wild porcupettes, our newest member usually hides out during the day and seeks shelter in a safe area on the ground while its mother retreats to the trees drawing attention away from her offspring. We’ve tried to minimize our handling of the porcupette and don’t yet know its gender.

A nocturnal animal, the porcupines are best viewed early morning or late afternoon in their exhibit outside of the Donald M. Kerr Birds of Prey Center.

Sage Grouse: Icon of the Sagebrush Sea
Building the Past to Experience the Present