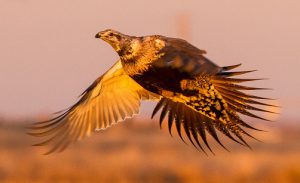 My fascination with sage grouse began 20 years ago with an invitation by a friend to hunt the majestic greater sage-grouse with our falcons. I arrived in late November at his camp on the banks of the Sandy River in Wyoming, along a stretch peppered with Oregon Trail gravesites. This treeless, exposed stretch of river felt more like a moonscape than a center of a vibrant ecosystem. The Sandy flowed during the brisk, but sunny mid-day weather, but locked with sheets of ice during the -20F nighttime temperature — no doubt a brutal experience for the thousands of pioneers racing to beat the descending winter.

We were on the cusp of the ‘winter grouse’– a term used by falconers with a kind of spiritual reverence to describe the sage grouse, in their transformation to a near-immortal condition. While most gamebirds, like pheasants and partridge, suffer their highest mortality during the harsh winter months, the sage grouse seems to turn nature’s rules upside-down. Instead of huddling inside shrubby cover for warmth and protection, mid-winter sage grouse are found across exposed plateaus, browsing short-statured sage in 20 mile per hour winds and subzero temperatures. They not only survive, but they gain weight.

I heard stories of their winter congregations, and like many tales of “the good ol’ days”, I was skeptical. But the second day, my friend took me to the spot he estimated was the largest annual winter congregation of sage grouse in the species’ range. As we got out of the truck, you could see the heads of grouse peering over the sagebrush as far as you could see. Off in another direction, I shouted to my friend, “Ducks!?” pointing to a distant milling flock of birds 800 feet up in the sky, that probably numbered nearly a thousand. “No. Grouse,” he said. In yet another direction grouse were taking off from the sage and were so thick their wing-tips were slapping each-other. Within seconds, they were pin-dots over a large, distant butte. As we left the scene, hundreds of antelope filed over a ridgeline and a herd of wintering elk from the Wind River Range, held fast in the center of a huge sage-dominated flat. I was left stunned.

That exact spot is now home to the largest natural gas field in the world, the Jonah Field. This was the species’ stronghold–so the Jonah Field, to us, represented the beginning of the end. Yet in the years following this development, the conservation community engaged in the issue in a way never-before seen. Agencies, non-profit conservation organizations and private ranchers have pursued a collaborative approach to sage grouse conservation and restoration that holds significant promise. The U.S. Fish and Wildlife Service is expected to make an announcement this September to decide whether or not the greater sage-grouse will be listed as threatened or endangered under the authority of the Endangered Species Act. Will a proactive, collaborative approach win the day or will regulation be the species’ safety net? Please visit Sage Grouse: Icon of the Sagebrush Sea and learn more about this pivotal species of the High Desert.