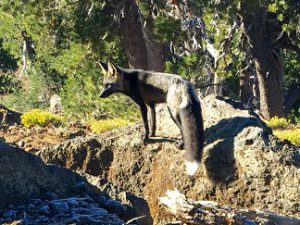 It was the end of a hot summer day in 2012 on Little Cultus Lake. My wife was riding shotgun, two sunburned kids on the backseat, all of us singing along with the radio. As I eased around one of the winding corners of the Cascade Lakes Highway towards Bend, a flash of movement caught my eye. I slowed down, squinting to see a dark animal with a bushy tail and long, skinny legs drift across the asphalt. It was in no hurry as it moved through a shallow ditch and took a seat among the daisies and lupines along the edges of the ditch. I needed a better look, so slowed down and stopped about 40 yards away. Several years later, my work would focus on this elusive creature.

The animal was a red fox, a species known for being elusive. His coat was coal black and silver-tipped; the very tip of its bushy tail looked like it had been dipped in white paint. He was also very small. He ignored us altogether, snapping at insects around his head while his plume of a tail flipped back and forth in the grass. He scratched behind an ear, then wandered off toward the tree line. We watched for a few more seconds and then continued on our way as the fox disappeared into the shadows of the Deschutes National Forest.

Most Oregonians don’t think of foxes as rare. While the red fox is not as common in this state as in other parts of the country, it is not all that unusual to see one. Farmers, hunters, trappers and many other people who frequent the outdoors will tell you about the foxes they have seen, usually on irrigated farmlands around the state. However, the mountain foxes are more cryptic and, it would seem, less abundant. In order to understand what is going on here in Central Oregon, you need to know a little bit about the natural history of the red fox.

The red fox (Vulpes vulpes) is one of the most widespread and genetically diverse mammals on the planet, with as many as 45 recognized subspecies occupying every continent except Antarctica. Thanks to the historical popularity of fox hunting in England, as well their valued hide in the fur industry for centuries, some of those subspecies have been moved around the world into places where they do not belong. Introduced intentionally or having escaped from cages, these animals become invasive. Red fox are not native to Australia; hence, all six million or more of the foxes on that continent are descended from introduced stock. The same is true for some populations of red fox in the American West. Animals in parts of California, Oregon and other states are likely descended from non-native subspecies, and we think they tend to be those living at lower elevations and are the ones most often spotted by humans. 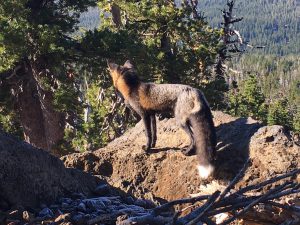 North America has native foxes as well, 13 subspecies according to some sources. Three of those species live in the Pacific Northwest. All three are frequently referred to as “montane fox”, or foxes that live in the mountains. The Rocky Mountain Red Fox (Vulpes vulpes macroura) is found in the Rockies and the Blue Mountains of Eastern Oregon, while the Cascades Fox (Vulpes vulpes cascadensis) and the Sierra Nevada Red Fox (Vulpes vulpes necator) inhabit the mountains running up the middle of Northern California, Oregon, and Washington. These animals evolved to live, so the theory goes, in a much cooler prehistoric North America. As the climate warmed over the millennia, these foxes retreated to the mountains. There among the conifer forests and talus slopes they adapted to deep winter snows, cold temperatures and a harsh environment.

Montane foxes have lush, warm coats. They are smaller in body size than the red fox most people are familiar with and have toe pads that are completely covered by winter fur, attributes we think aid them in moving across the surface of deep-packed and drifted snow. 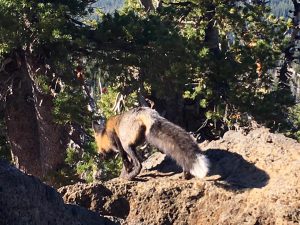 As skiers in Central Oregon are well aware, those snowy high elevation conditions are increasingly unreliable. A changing climate and human development put species dependent on high mountain habitats at risk. In many recent years the snow has barely come at all. Other years it is heavy but wet, melts quickly, and is gone earlier in the spring.

Nonetheless, the mountains are beautiful. Numerous types of recreation are popular and human disturbance is pervasive in all seasons. The habitat has changed, and is continuing to change in ways that may not be good for montane foxes and other species that share their proclivity for high elevations and historically colder environs. As those little islands of remaining cold mountain forest become smaller and more fragmented, they also become increasingly isolated from one another. Separated by greater and greater expanses, the land may become devoid of mountain fox. There were many unanswered questions about what was happening with these intriguing creatures in the Cascades that humans weren’t seeing. So a group of us came up with a plan to try to find out.