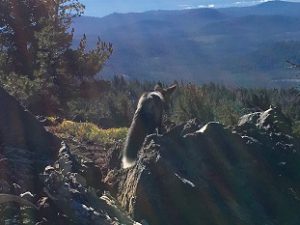 Around the same time I saw the fox on the Cascade Lakes Highway, I was working on an undergraduate research project at OSU-Cascades. We were in the early stages of fleshing out a study idea using remote cameras to document the behavior of scavenger species around carrion. The work was tedious and unpleasant. Road-killed deer would be moved, with proper permits of course, into the forest. We then mounted remote cameras to see what carnivorous animals would come to feast. The images we captured would be used to test various hypotheses about how wild animals discover carrion and utilize it as a food resource. The job was much worse in the heat of summer, and the smell often

Not long after my family’s roadside fox encounter, my family was back at the lake. On the drive home we again encountered a mule deer that had been struck and killed by a car as it tried to cross the road same less than a mile from where we had seen the fox. It was a valuable opportunity to get a carcass already in the woods. No need to move it very far or touch it more than absolutely necessary. It would be a dirty job nonetheless, but a short downhill drag would have the deer into the trees and in an acceptable location. My family was not thrilled about helping, so I made a quick call to a fellow student who came up that evening and set up a camera.

Several weeks later, we returned to see what we’d caught on camera.

It’s always exciting to retrieve a trail camera. You never know what you’ll see in the images. This time though, we did not expect much. Experience told us that activity around carcasses that time of year is relatively predictable. High summer temperatures mean rapidly decaying meat, a good resource for specialized obligate scavengers, but not necessarily for most other species. Turkey vultures dominated our summertime data. Nevertheless, it had crossed my mind that the fox might visit. A smelly carcass will sometimes attract carnivores out of curiosity if not hunger. Sure enough, as we toggled through the images one-by-one, there was a fox. However this one was not black; she was red just like most people would expect a fox to be. Now we knew there were at least two in the area, and even at that time the significance of the discovery was not lost on us. Only a month earlier news stories had been circulating of a rare fox being recorded on Mt. Hood.

There is a lot we don’t know about native red fox in Oregon. For a long time there was confusion about which subspecies was even present. Earlier sources identified them not as Sierra Nevada, but as Cascade Red Fox, the same subspecies you find in the mountains of Washington State.

Old wildlife distribution maps are full of straight lines which often indicate a gap in scientific understanding at the time more so than a realistic boundary between populations. Some of those maps show the Oregon/California border as the separation between the two subspecies in question. More recently, the science has suggested that the foxes in Oregon are likely more closely related to populations in California, and are the Sierra Nevada subspecies. More data will help answer the question, but in my mind at least, the Columbia River is a far more realistic barrier between them than a human political border, as much as Oregonians may want to believe that Oregon foxes are good at keeping Californian foxes out of the state. 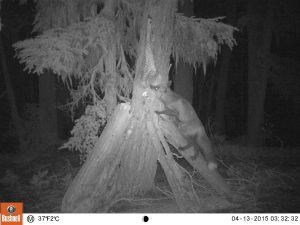 A few years back, this revelation had some significant policy and management implications. While all three of the Pacific Northwest red fox subspecies are considered to be rare and at risk, in 2010 the Sierra Nevada subspecies was petitioned by environmental groups for Endangered Species Act protection, triggering an official policy process that ideally would be based on lots of good data. But in those early years very little was known about the fox. Many believed the Sierra Nevada subspecies was one of the most imperiled carnivores on the continent, with only a few dozen individuals remaining in a few remnant populations in Northern California. That was before they started popping up in Oregon. Since those early Oregon discoveries in 2011 and 2012, the number of fox sightings has gone up, a lot. Researchers using trail cameras to look for wolverines in 2013 and 2014 turned up no traces of that montane mustelid in the Three Sisters Wilderness, but they did find foxes. My own little scavenger project ultimately documented the animals at four separate locations outside of the wilderness on Mt. Bachelor, and biologists and volunteers working for the nonprofit Friends of the Central Cascades Wilderness have also found them in the area. Foxes have been documented in Crater Lake National Park and on Mt. Hood. Research has been ongoing in the southern portion of their range in California, as well.

Perhaps more striking than the far flung remote camera detections of shy, elusive foxes off the beaten path, is the fact that recreationists have also been encountering the animals with increasing frequency in much more developed portions of the forest. In recent years some of the animals here in Central Oregon have become habituated to humans, something that is unfortunately not unusual for red foxes throughout their range. On a nearly weekly basis excited members of the public send me photos of foxes. My inbox has photos of a black fox by the road during Pole-Pedal-Paddle, and a red one under the ski lift at Timberline. Visitors show me cell phone images of foxes at Hoodoo, and foxes standing between the cars at the snow parks on Mt. Bachelor looking for scraps of food.

The Cascade foxes of Mt. Rainier in Washington are also famously tame, allowing tourists to hand feed them and take photographs. Constant sightings of a few habituated animals creates the impression of abundance and a burgeoning population, sometimes making the issue confusing for public audiences at the museum when we attempt to weave a complex story of habitat loss, climate change, conservation concerns, and huge gaps in the data for red foxes, despite their apparent weakness for hotdogs and other free handouts in the Mt. Bachelor parking lot.