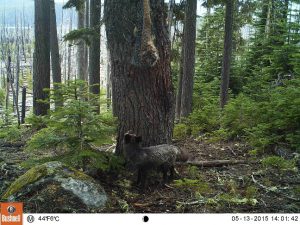 Beginning in March 2015 Museum staff and volunteers, in collaboration with the USFS, ODFW, The Oregon Zoo, have placed more than ten bait stations and hair snares in areas of the Deschutes National Forest that had never before been surveyed for fox.

A whole deer is too heavy to carry into the forest and it’s more than a fox can eat, but venison is often still the preferred bait. The leg of a deer or some other smaller piece of meat is attached to a tree above a mechanism designed to snag a tuft of hair from any curious fox that visits for a free meal. A remote camera is attached to another tree facing the bait. As forest animals wander into view, a motion detector triggers the camera and a photo is taken.

When Museum wildlife staff or volunteers visit the bait station every month or two, they check the camera for photos of a fox. If there is one, hair is taken from the hair snare mechanism, documented, and bagged. Like any good biologist, we are also always looking for scat, and any we find that looks like it came from a fox is also bagged. Those samples go to a lab at the University of California at Davis for DNA analysis. There, researchers generate data that may hold answers to questions about habitat connectivity, what subspecies are present, and whether or not our high country native foxes are hybridizing with introduced populations at lower elevations.

Back at the Museum, images from the cameras are sorted and broken down into data. Numbers on a spreadsheet indicate what animals are using the forest at specific points in time and space. Thousands upon thousands of images are scrutinized, one at a time, with much of the work done by the Museum’s own “mammal team” volunteers.

Those same volunteers give daily carnivore talks. At those interpretive presentations, visitors get to learn about the ecology of many forest carnivores including foxes. They can touch a montane fox pelt and see a skull, as well as learn about the ongoing research and the story of mountain foxes unfolding in our own backyard. More than that, and one of the things that I love so much about the High Desert Museum, those presentations frequently become much more than a lecture. They sometimes turn into vibrant conversations between interpreter and audience, a two-way exchange of experiences, ideas and information.

Bend is a community of people with strong ties to the surrounding forest. People see foxes while recreating in the woods, and through the Museum, many people who previously gave foxes little more than passing notice have become more aware of the issues surrounding them. Now when they go hiking they notice tracks and scat, take photographs and record where they find foxes. Often they call me or return to the Museum to share their experiences. Some of my best leads about where to look for animals have come from engaged visitors sharing their knowledge of the forest with me after hearing our daily programs. The project has in many ways become an unofficial kind of citizen science.

In large part because of the flood of new data coming in, the USFWS determined in late 2015 not to list Oregon populations of Sierra Nevada Red Fox on the Endangered Species Act. However, just because they are not listed as endangered does not mean that foxes and other forest carnivores are not at risk. More information is clearly needed to make good data-driven decisions about managing many of these wildlife species, and biologists with the USFS and ODFW are hard at work trying to collect that information despite limited budgets and an already heavy workload.

Since that first sighting with my family in 2011, I have not had more than a fleeting glance of a fox in the woods. The flash of a white-tipped tail in the timber is about all I usually get, but I am thankful other people are seeing them and sharing those sightings with us. With support from the Oregon Zoo, the Museum will continue to assist state and federal biologists who are working hard to manage our wildlife resources. Staff and volunteers will monitor our cameras for foxes and other wildlife in the eastern foothills of the Cascades for as long as our help is useful. We will also continue to follow the changing story of the Sierra Nevada red fox in Oregon, and share it as it unfolds with visitors at our daily carnivore talks and other programs. I hope to check many more cameras in the year ahead, and to be lucky enough one day soon to see another Sierra Nevada red fox playing in the wildflowers in the Deschutes National Forest.