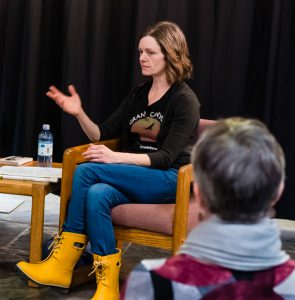 The High Desert Museum exhibit The Beauty of Wild Things: Charcoal Drawings by April Coppini is open through June 23, 2019. Coppini’s deep love and respect for the natural world is evident in her large, lifelike drawings of wildlife, from mule deer and foxes to butterflies and bumble bees. The artist hails from a wooded suburb in Rochester, New York but has called Portland home for almost 25 years. Coppini joined us at the Museum in March not long after her exhibit’s opening to speak about her art, life and inspiration. The conversation continues here.

In your new exhibit at the High Desert Museum, your gestural charcoal drawings almost appear to move on paper. Is that an intended element of your artwork?

Only in that I’m trying to capture or convey something of the life of the subject as I draw. So it’s not foremost in my mind as I draw but more of a result of the process, thinking about movement and the life of an animal. And I’m always excited when I step back and the drawing has that feeling of moving, and always slightly disappointed if it appears lifeless and still to me! It’s like a surprise.

Living and creating in a city such as Portland, do you ever feel disconnected from the wildlife which you draw? Where do you go to escape the growing city?

I do feel disconnected at times, but I’m lucky enough to rent a house with about a quarter acre which, of course, is overgrown and unkempt from a busy life with kids. So wild things are attracted to the yard. We have chickens, so raccoons like us and coyotes run down our street. A couple of weeks ago a hawk swooped down in the yard about 15 feet from me, grabbed one of our hens (Fern) and dropped her a few seconds later, probably because she was too heavy!

We also live really close to Whitaker Ponds and that’s a favorite place for us. But I miss deer and rabbits and quiet, dark nights where you can see so many stars. So, we go to Astoria or Seaside or Pacific City every few months. We also hike in the Gorge or take the dog to the Sandy or Columbia. We’ve taken family trips to Bend, Cove Palisades and the Sawtooth Mountains in Idaho. One day I hope to get a little cabin somewhere.

Do you ever draw subjects other than wildlife?

Plants! Flowers, people (in my sketchbook), domestic animals, motorcycles for my son.

In your Instagram feed, you shared the honor that comes from displaying your work at the Museum at the same time that we were hosting Rick Bartow: Things You Know But Cannot Explain. What kind of inspiration does the renowned Native artist bring to your work?

Rick’s work speaks to me on a spirit level, like the lines between humans and animals and species blur, and there is spirit, story. And it’s his story but all of our story, too. So, I’m filled with awe and wonder when I visit his work. The colors have an indescribable emotional impact. I feel forces beyond us. So those are things I hope for in my own work, that it might reach people in such a deep way, although differently. His work is also a reminder to play, to enjoy working. I sometimes get too intense and tight, and I’d love to work in color more!

When you spoke with visitors at the Museum in March, you shared that during your art school years, it was all about abstract art. Representational art was frowned upon. Did you work with abstract art at that time or have you always held firm to representational art? How did you buck that trend, so to speak?

The work that was favored at that time was conceptual, so more installations and concept/process over making work that fit into outsider’s view of what is “good” and saleable and fits on your living room wall above the couch. Although that time was challenging for me, I did work in video and installation, and somewhat abstractly even though I always went back to representational work, kind of like it’s my language. Ultimately, that experience made me think bigger, and more universally, and when I began to work when I was out of school I think it helped me experiment and think about the bigger, wider possible impacts of my work on the world. But I always fall back to figurative work because I am enthralled with living things. That’s how I want to spend my time. That’s what I’m curious about.

You have a love and respect for pollinators, specifically the bumble bee. How has your reverence for the many species of bumble bees evolved?

Originally, it was my late partner, Andy, who shortly after we met, told me about honeybees dying and colony collapse disorder. That sparked a series of drawings of bees, and as I started to search for reference photos, I began to see how many different bee species there were. It blew me away. I began to see them more out in the yard and I’d try to wrap my brain around the job they do and how some bees have a buzz that is the specific frequency to release the pollen of a particular flower or it won’t release otherwise. I got to know which bumble bees were native to the Pacific Northwest and also back East where I grew up and which ones were red-listed and declining, which ones haven’t been seen in years. I connected with the people at Xerces Society (which happens to be in Portland), an international invertebrate conservation organization. Now I follow their work and donate a portion of my sales from bee drawings to them. I also upload photos of the bumble bees I see to Bumble Bee Watch and iNaturalist to help their research. Entomologist E.O.Wilson says we all need to become amateur naturalists to stop the rapid extinction of species that is happening now, and I feel this is true.

Have you ever found any subject too difficult or elusive to draw?

I was commissioned once to draw New Zealand’s extinct Huia birds. Even though I printed out a ton of references, I just couldn’t get a feel for them. The last confirmed sighting was in 1907, so there aren’t good photos of them alive. I also have this gut feeling that the life force of a creature is out there, and I can feel it, drum it up when I’m drawing. Sounds kind of silly maybe, but who knows, right?! 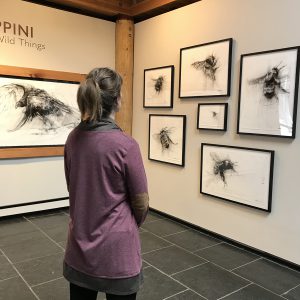 How do you know a drawing is finished?

Pretty much when I feel like I’m about to ruin it! I’ve definitely overdrawn some things! And sometimes a drawing just clicks at a certain point and you know.

Repairing the Tipi
Behind the Feather Duster