Storytelling is a big part of what we do at the Museum. Narratives can be a powerful tool for teaching and learning, and for fulfilling our mission of connecting audiences to the High Desert region. All of the objects, exhibits, and staff at the museum have stories to tell, and so do each of our animals. One of the things we look for when we bring an animal to the museum is a good story, one that will spark a connection with our visitors. 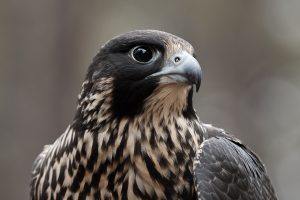 Late last summer a new resident arrived at the Museum, one with a particularly dramatic and colorful past that paints a vivid picture of the recovery of her species from near extinction, and of the challenges they face in new habitats today. She is a peregrine falcon named “Hope,” one of a clutch of four hatched by wild parents high upon a building in Tacoma, Washington.

In the early 1970s peregrine falcons were among the first animals added to the Endangered Species Act, their populations ravaged by the effects of the organophosphate pesticide DDT. Thankfully they are also one of the ESA’s most resounding success stories, soaring back from near extinction and quickly recolonizing habitats across the continent, including in major cities where tall buildings simulate the cliffs they require for nesting, and where urban pigeon and starling populations provide an abundant food source. Once extremely rare, today peregrine falcons are part of the daily lives of people in major cities throughout the country, and Hope and her siblings enjoyed celebrity status for a short time in Tacoma. However, the attention urban raptors receive also means that human onlookers often get a front row seat to the harsh realities of their natural history.

Like most raptor species, peregrine populations endure high mortality rates in the first year of life. At least 60 percent of peregrine falcons will not make it to age 2. Big cities can be good habitat for falcons, but they are also dangerous places for learning to fly. Hope and one of her brothers both fell from the nest to city streets below, but were “re-nested,” or returned to the high ledge by humans for their parents to continue care. Eventually, two of her brothers, including the one that fell, successfully fledged. However, a third died after flying into a window, and Hope eventually fell a second time. The injury to her wing was too severe for her to make it as a wild falcon.

The High Desert Museum is a refuge for many native animals that would not survive in the wild, serving as both steward and custodian of animals that by law belong the people of Oregon and the United States. Non-releasable animals come here from rehab facilities across the west for lifelong care, and are made accessible to the community through dynamic educational programs that emphasize wildlife ecology and conservation in our region. Each individual animal is evaluated carefully based on its preferences, history, and physical limitations for what programs it wants to participate in, and is trained accordingly not only for public presentation, but also for daily exercise and enrichment. The goal in all cases is to give these animals the best quality of life possible.

Hope has proven to be a very special bird. After a few short months of careful handling and daily exercise, not only has she learned to sit on the glove for daily bird of prey talks, but she has very quickly progressed through an intensive training, physical therapy, and exercise regime, and has once again learned to fly on a limited basis with her injured wing, and she absolutely loves doing it! Flying sessions have become a highlight of every day for both Hope and the wildlife staff.

Because of her story, Hope will be especially useful for connecting audiences to the adaptability of peregrine falcons and their increasing use of urban environments, and also to the additional challenges they face in those habitats. This winter and spring you will be able to come to our daily Bird of Prey talks, and next summer she will debut in our Raptors of the Desert Sky free-flight program where she will educate audiences about the recovery of her species throughout the High Desert region and beyond.