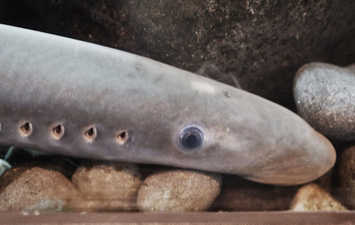 Few people know about lampreys; fewer still have ever seen one. When they do see one for the first time the initial response is often is fear or revulsion. Most often this is because of the Pacific lamprey’s appearance and their parasitic feeding behavior once they’ve migrated to the ocean.

Evolutionary biologists make the argument that humans are hard-wired to fear things that slither and crawl, animals that may bite. Even if this theory is true, I would argue that the instinct is strongly reinforced by the society we live in. Movies and media depict monsters inspired by real life. Americans are immersed in the notion that some animals are good and some are bad, and those black and white ideas shape the way we react to wildlife. Not does the lamprey look like a snake, but it is also a parasite. Juveniles in fresh water are filter feeders that live in the sediment at the bottom of streams. However, adults (having migrated to the ocean to build up the stores of energy needed to spawn) have a sucker-like mouth lined with rows of sharp teeth with which they attach themselves to hosts (other large fish and marine mammals) and then feed by sucking blood and other bodily fluids.

From a Western perspective, lampreys look and behave in ways that many people find alarming, even scary. Unfortunately, this has led, in part, to their decline. Often considered a “trash fish, lamprey have been overlooked, abused, and persecuted in modern times. Their habitat has been altered, their path to the sea blocked, and they have been eradicated with little regard because their physical appearance overshadowed their importance within the environment. The lamprey has been lost from many streams within its historic range, and their abundance has plummeted from historic levels to point that their future existence may be in serious jeopardy.

Few animals are in greater need of public awareness and education. Please enjoy learning more about the lampreys on exhibit in the Autzen Otter Exhibit.

A Christmas card and a Camera: Objects with Stories to Tell
The Historical Significance of the Lamprey