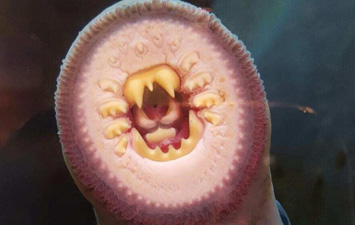 The same characteristics that enable lamprey to persist for a year without food, also makes them valuable to the ecosystem and a precious and highly valued resource to Native American tribes. Historically, lamprey was a rich source of protein-rich food, higher in calories than salmon. They played a significant role in ceremonies and celebrations, and the oil was believed to have medicinal qualities.

The first Europeans setting in Americans brought many changes that devastated lamprey fisheries, and populations have continued to decline well into the 21st Century. Biologist attribute the ongoing decline of the lamprey to passage problems at dams, destruction of spawning and rearing habitats, declines in their food sources, and intentional poisonings of streams to eliminate unwanted fish.

Despite these challenges, Native American tribes have maintained a deep cultural connection to the fish. As a result, the tribes of the Columbia Basin have spearheaded efforts to conserve them, leveraging traditional ecological knowledge and merging it with contemporary fisheries science to restore lamprey to High Desert streams from which it had been lost.

Fish are trapped from locations such as Willamette Falls and Bonneville Dam on the Columbia River, then moved upstream, past other dams and miles of degraded habitat before being released into streams from which they had been wiped out, hopefully to spawn and reestablish lost populations. The tribes have also done amazing work at spreading the word about lamprey conservation, educating the public and changing people’s perceptions about these misunderstood fish.

As one small part of that effort, the High Desert Museum is happy to display two adult Pacific lamprey from the Confederated Tribes of the Umatilla Indian Reservation. These fish are on display in the Autzen Otter Exhibit. Visitors can view and learn about the lamprey’s role in riparian ecosystems, as well as the history, science, and cultural ties these special fish have in the High Desert.

The wildlife staff at the High Desert Museum can’t think of a more appropriate species to help audiences discover cultural connections to the past and understand their responsibility for protecting the lamprey today and into the future.

Lampreys: Not the Villain Portrayed in the Movies
Lampreys: A Key Species in the High Desert Ecosystem