Sometimes, spring cleaning sneaks up on you, even when it’s snowing outside. This past weekend, the chore began as a quick vacuum to make the layer of cracker crumbs from the 4-year-old disappear. With the dark corners underneath furniture and behind curtains, however, my simple task became an all-day chore.

At the High Desert Museum, our collections volunteers do some spring cleaning of their own. Recently, both Spirit of the West and By Hand Through Memory, permanent exhibits, were briefly closed for an annual cleaning. Open since 1988, Spirit of the West offers a journey through the High Desert in the 19th century, including a Northern Paiute shelter and Hudson’s Bay Company fort. By Hand Through Memory, which opened in 1999, focuses on the Columbia Plateau Indian Nations. These two exhibits house hundreds of artifacts and objects, seen by thousands of visitors every year. To preserve the integrity of every single object, they must be cleaned, dusted and vacuumed.

Yet in exhibits with so many objects, where do you even begin cleaning? My house is one thing. An exhibition is quite another.

As I began quietly poking around the brightened exhibits, I was greeted by a small group of people doing their dizzying chore with immense pride. The spring cleaning is organized and guided by Museum curatorial staff. They are assisted by a group of dedicated, knowledgeable volunteers, many of whom have done this year after year. Darla, one of the collections volunteers, shared with me that the project is a huge part of their stewardship, the great care and ownership they take in the High Desert Museum. 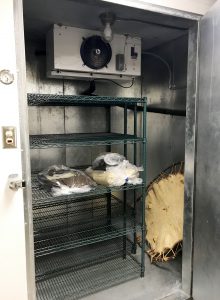 The very first thing they do is remove all of the woolen and fur objects and props. They are packed neatly in labeled plastic bags and put in the freezer for forty-eight hours. Wait, a freezer? In order to destroy any moths that may be attempting to call it home, the object goes into an industrial-size freezer not meant to store employee lunches. Yes, even the taxidermy beaver makes the freezer his den for two days.

Once the woolens and furs and still-life critters are tucked away, the real cleaning begins, the kind of cleaning that happens with vacuums, brooms, feather dusters and soft rags. Just past Silver City in Spirit of the West is a cattle rancher’s settlement, with a wagon and cooking gear across the path from the bunkhouse filled with tack, every piece of equipment one might need to saddle and ride a horse. Each piece of riding headgear is gingerly removed from its hook and slowly cleaned with a soft cloth. The 100-year-old tack is returned to its place, creating the scene for visitors and making them feel like they’ve entered the bunkhouse of a real-life vaquero. No vaquero would let dust gather on his tack.

During my time chatting with the volunteers, I learned the difference between a prop and an object. A prop is something that a visitor might have physical access to, a wool blanket in Spirit of the West or pelt in By Hand Through Memory. Props are delicately stored in the freezer with the furs and woolens but do not require the same level of pristine handling as do the objects. Objects are protected behind glass or at a distance from the visitor and handled with the utmost care. 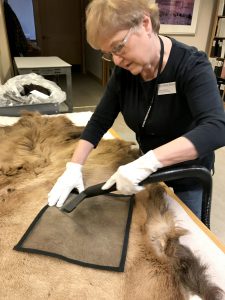 Once the cleaning of the scenes and objects is complete, the delicate focus returns to the woolens and furs. In Spirit of the West alone, there are seventy wool or fur objects. One might expect that every object is handled the same way, with cloth gloves as if in an episode of “Law & Order.” I learned from Darla that some gloves can pick up fibers from the furs. Thus, some objects require latex gloves and others require a clean hand. The small team working on the project knows without communicating which object requires which kind of glove. Clearly, this is a seasoned crew. One by one, the objects are laid out and cleaned with a low-powered vacuum. A small screen is placed in between the object and nozzle. The screen protects the object, keeping it from giving up too much fiber.

Closing off the popular permanent exhibits is done rarely. It’s done only for the most important of reasons, cleaning being one of them. The team works fast, with care and speed. Spirit of the West and By Hand Through Memory were each closed for five short winter days.

Both exhibits are back open to the public and looking as pristine as ever. Already, I can’t say the same for my carpet.

For many visitors, the Don Kerr Birds of Prey Center is one of the highlights of a day spent at the Museum. Raptors are not just an iconic part of the High Desert — they also have intangible value for cultures worldwide and throughout human history. The human connection to raptors is innate and universal. People everywhere are drawn to these powerful birds.

An important part of the Museum’s mission is to create a refuge for disabled raptors and provide the community with opportunities to enjoy them and learn about them up close. We do that with a collection of 30 non-releasable birds that participate in more than 1,000 public programs every year. 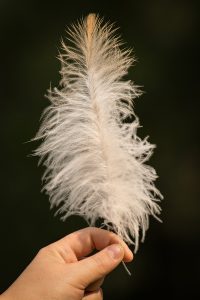 With that volume of education and outreach, raptor handlers quickly learn to anticipate the questions of a curious audience. Wildlife staff works tirelessly with our birds so they are comfortable with people getting close. Once close, people naturally want to touch. Being able to feel and hold something is a crucial component of an educational program. Touching has the potential to create powerful learning experiences. There’s a lot you can learn from holding a feather or talon, turning it in your hand, and feeling it in your fingers that would be imperceptible simply looking at a bird from across the room.

Unfortunately, raptors don’t enjoy being petted or touched. Instead we offer the chance to handle raptor feathers, talons and wings at our regular talks called Bird of Prey Encounter, during Kids’ Camps, in classrooms and during community-outreach programs. Inevitably, people ask if they can keep a feather to take home.

Human fascination with raptors and other birds has not always been reverent or respectful. In some cases, it has led to the exploitation and abuse of wild populations. Many species were once hunted for the commercial value of their feathers, a practice that peaked in the early 1900s. In an effort to halt the commercial trade in bird parts and stem the decline of wild populations, most bird species received protection under the Migratory Bird Treaty Act in 1918. This federal legislation prohibits the possession of bird parts including feathers, eggs and nests, and together with the Lacey Act — which prohibits trade in wildlife, fish and plants that have been illegally taken, possessed, transported or sold — eliminates any legal commercial trade in raptors.

Sadly, sometimes raptors are still killed for their feathers. Because bird parts can command high prices on the black market, it remains illegal for people to keep raptor feathers and for the Museum to give them to anyone without a special permit.

We work closely with the Oregon Department of Fish and Wildlife and the U.S. Fish and Wildlife Service to maintain special permits so we can house live birds. This arrangement ensures that visitors have a place to enjoy raptors while learning about biology and conservation. We also have permits to salvage raptor parts for education so we can make sure the public has opportunities to feel how sharp a falcon’s talon is, the softness of an owl’s feather and how light birds’ bones can be.

On a live bird, feathers eventually wear out. Molting is the process by which birds lose old worn out feathers and replace them with new ones on an annual basis. With 30 live birds molting a full set of feathers every year, we have far more feathers than we would ever need for education. While we cannot allow visitors to take feathers home, we do not throw feathers away. One of behind-the-scenes ways the Museum supports raptor conservation is by making naturally molted feathers and excess salvaged bird parts available for use by Native American Tribal members. Raptors hold deep spiritual significance to most Native cultures. Tribal artisans and craftsman incorporate feathers into incredible works of art that clearly emphasize reverence and respect for the birds. Examples of these beautiful and historic objects are also exhibited at the Museum, illustrating the strong connection between wildlife, history and contemporary culture in the High Desert. 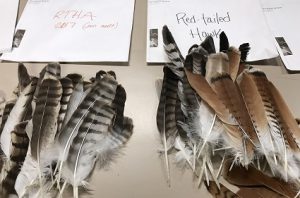 Every year in January the Museum’s wildlife staff prepares a report for U.S. Fish and Wildlife Service detailing the use of every live bird and bird part in the collection, including feathers that are part of historical and cultural objects on display. In our By Hand Through Memory permanent exhibition alone there are more than 200 bald and golden eagle feathers on exhibit, each one meticulously identified and inventoried by dedicated collections volunteers. Each item is required by law to be made available to the public a minimum of 12 times per year or for 400 hours, a benchmark the Museum far exceeds by providing exhibitions and programs to the Central Oregon community and visitors 362 days a year.

Extra feathers and other items are carefully packaged and mailed off. Eagle feathers and parts go to the U.S. Fish and Wildlife Service National Eagle Repository in Colorado, and other feathers go to a Liberty Wildlife Non-Eagle Feather Repository in Arizona. These facilities ensure that raptor parts are legally sourced and distributed to Tribal members throughout the country for traditional use. We recently sent off a shipment containing two seasons worth of feather collection, totaling more than 2,500 feathers or more to the two repositories.

This is one small way the Museum works to conserve wild bird populations while simultaneously supporting the rich cultural traditions raptors have been a part of in the High Desert for thousands of years.

Birds of a Feather: The Afterlives of America’s Eagles